Andrea Weinstein was interviewed by Rosalind Benjet on June 7, 2002. 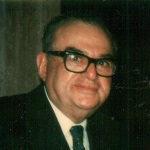 Meyer Rachofsky was interviewed by Ginger Jacobs on December 14, 1971.

From the Archive: Ellis & May Titche Wartime Correspondence Collection 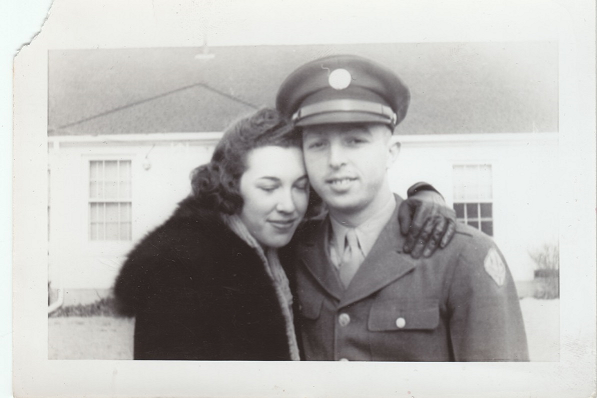 Ellis Titche and May Levy met in Dallas on August 28, 1943, when he was on a weekend pass from school in College Station, TX.  Ellis initially connected with Mr. & Mrs. Levy on a previous trip to Dallas, at the request of his father who was a cousin of Mr. Levy.

From the time of the first letter, from May to Ellis inviting him to visit, in the Summer of 1943 (at the request of her mother), the two exchanged correspondence almost daily for over three years while Ellis was in school, training with the military, or overseas fighting in World War II. During this time, they got  engaged, were married, and had a child.

We are fortunate to hold within our collection, a large percentage of the original letters. As primary source documents, they detail experiences from training and war camps, societal trends and expectations, and the “average” life of a wartime bride and her beloved.

Here you will see a sample of one of the Ellis’ earlier letters to May and her response, from March, 1944, as well as one of their last exchanges in the collection, from January, 1946.

Not long after the later exchanges in January, 1946 Ellis returned to Dallas from the European Theater, where he began his daily life with May and their daughter, Patricia. 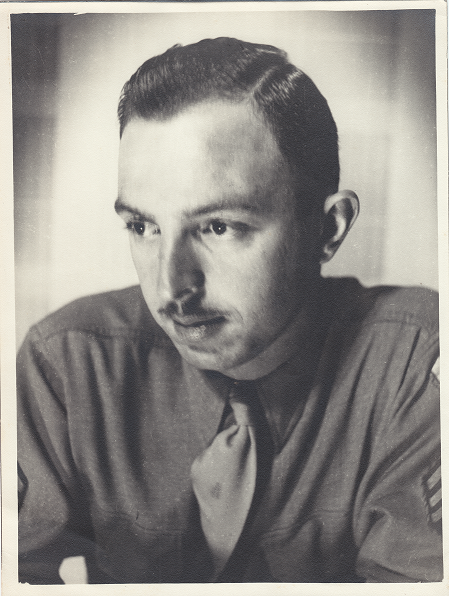 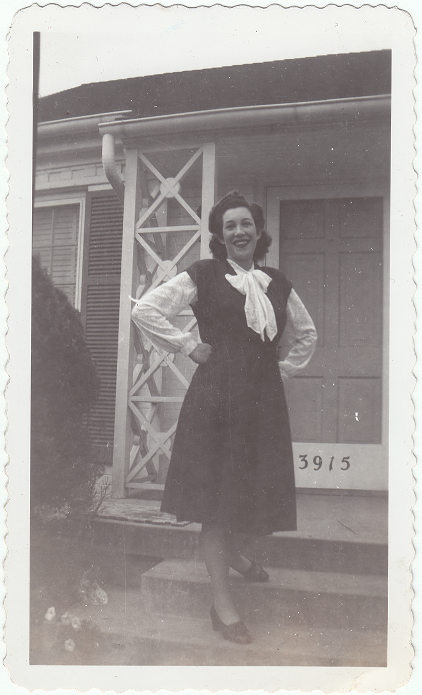 This large and valuable collection of letters is in the process of being organized, cataloged, digitized, and eventually published.

Our dedicated volunteer, Mel Ginsburg, has been studying and recording Ellis’ letters for nearly  two years as part of our initiative to share the letters in an auditory format. Soon you will be able to visit our website and hear the emotion Ellis poured into his daily pennings to May.

This is an ongoing project, which we hope to expand. If you, or someone you know, is interested in volunteering to read and record May’s letters to Ellis, please visit our office or contact Jessica, DJHS Archivist and Volunteer Director, at archivist@djhs.org 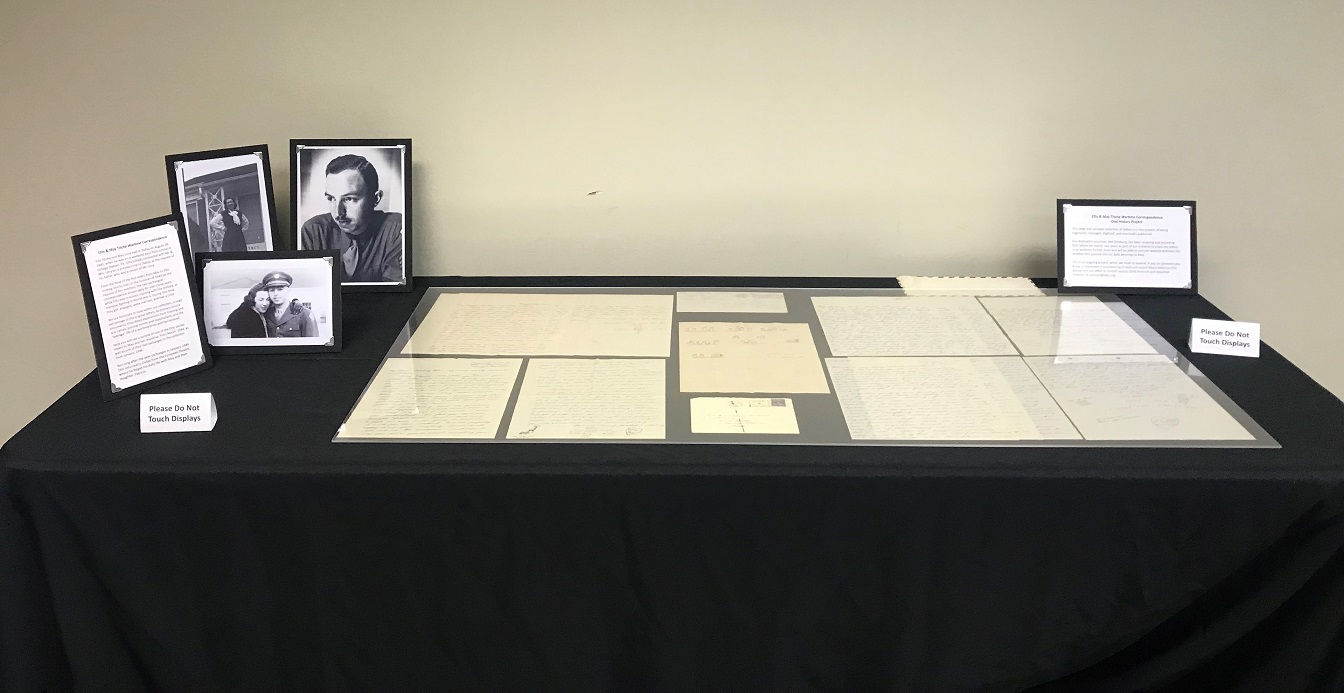 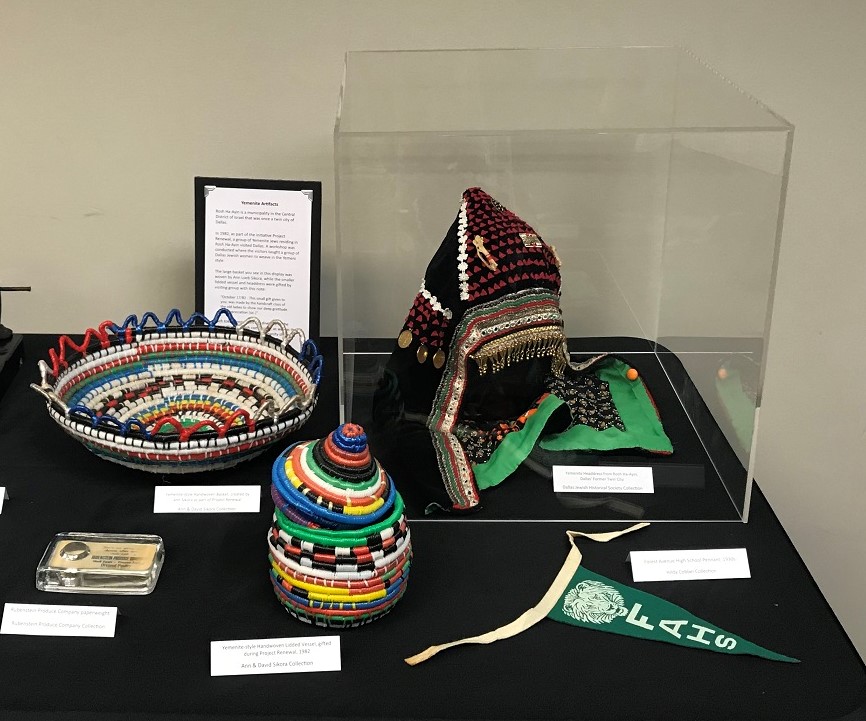 Rosh Ha-Ayin is a municipality in the Central District of Israel that was once a twin city of   Dallas.

In 1982, as part of the initiative Project Renewal, a group of Yemenite Jews residing in Rosh Ha-Ayin visited Dallas. A workshop was conducted where the visitors taught a group of Dallas Jewish women to weave in the Yemeni style.

The large basket you see was woven by Ann Loeb Sikora, while the smaller lidded vessel and headdress were gifted by the visiting group with this note:

“October 17/82 – This small gift given to you, was made by the handcraft class of the old ladies to show our deep gratitude and appreciation [sic.]”

Such tokens represent the diversity of the international Jewish community, as well as the connection, kindness, and humanity shared among the diaspora. 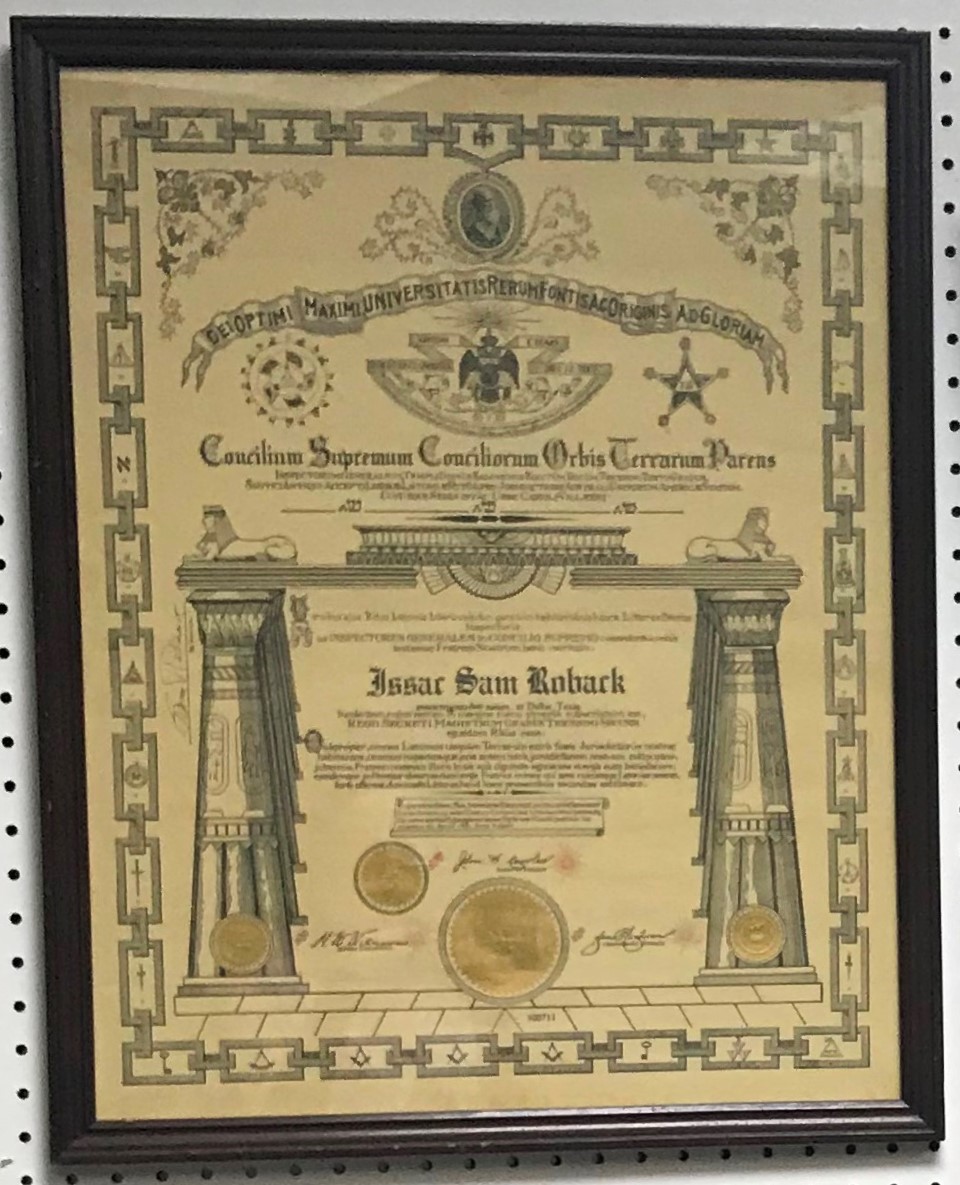 The Freemasons are an international ecumenical, apolitical, non-denominational fraternal order that can be traced as far back as the 17th century in France. The teachings were brought to the United States by the late 18th century via colonial Caribbean communities.

Up until 1802, all Freemason lodges and various sub-groups in the United States recognized themselves as having a common source and followed freemason doctrine, but did not operate under a single umbrella. As a result, the Supreme Council of the Thirty-third Degree for the United States of America was formed with the motto “Ordo ab Chao”—meaning “Order from Chaos.”

The Supreme Council of the Thirty-third Degree most specifically represents the Scottish Rite. The Scottish Rite expands upon the standard practices of freemasonry—the initial three degrees of which lead to the designation of Master Mason—to include twenty-nine additional lateral “degrees” that increase one’s knowledge and understanding of the “Craft” without increasing one’s hierarchical rank.

As such, a member of the Scottish Rite can attain up to the 32nd degree. There is another degree, one of high honor, that can only be bestowed upon a member through nomination, in recognition for one’s dedication to charity, community, and other tenants of freemasonry. That degree is the 33rd.

Jews have been involved with freemasonry from the outset. In fact, there were four Jewish members in the original eleven-member Supreme Council that convened in North Carolina in 1801. Prominent Jews have remained involved since—including some with a connection to Dallas.

This certificate was presented to Isaac Sam Roback, a prominent member of the Dallas Jewish Community on April 30, 1926 for attaining the 32nd degree of the Scottish Rite. Below is a rough translation of the Latin text:

Banner at the top: “God the great source and origins of the Universal Honor”

Seal: “Order from chaos/In God is our trust, God willing”

Body Text: “We, the general inspectors who sit in the Supreme Council, bear witness to all freemasons of this rite living amongst any people who are going to inspect this letter that our brother who has rendered valuable services to us that same rite.

Isaac Sam Roback, living in Dallas, TX, whose name is written by his own hand in the margin, is a Master of the Royal Secret of the 32nd degree of the same rite.

Therefore, we request all masons who are living in any country outside of our jurisdiction, but order those located within our jurisdiction, to recognize him, our brother, in his dignity of character and to do well towards him. And we promise to respect the same of brothers who come to us with similar documentation. The Imperator Excelsus, Scriba Generalis, and Cancellarius Grandis have signed the seal of the Council, we have ordered to fortify our cities, today the thirtieth day of April, 1926.”

Treasures from the Archives – March 2016

By Stuart Rosenfield, DJHS Board Member

Among the many collections to explore, the archives of the Dallas Jewish Historical Society, located in the Aaron Family JCC, houses a collection from one of Dallas’s most progressive Court of Appeals judges, Barbara Rosenberg.

Barbara Rosenberg’s story, from her early political beginnings while studying for the bar, to being a pioneer as a woman in the legal profession, her nationally renowned campaign against an establishment candidate, and her tireless legal work to advance gay and lesbian rights, is a story documenting Dallas’s changing attitudes from the late 20th century to today.

Born and raised in San Antonio, Texas, Rosenberg attended the University of Texas at Austin, and later moved to Dallas where she became involved in the Democratic Party. In her early career, she worked with several law offices, including the legal team that defended people arrested during raids at Village Station in the late 1970’s. A constant advocate for LGBT and women’s rights, Rosenberg worked to educate members of the Gay Political Caucus on the participation process for the Democratic Convention and served as vice-chair of the Dallas Area Women’s Political Process.

Appointed to her first judiciary position as Associate Municipal Judge in 1977, Rosenberg went on to serve as an Associate Judge for the 330th District Court (1984-1991), and as an Associate Justice (1992-1994) and an Assigned Justice (1991-2003) of the Fifth District Court of Appeals at Dallas.  In addition, she has taught as an Adjunct Professor at Texas Wesleyan School of Law and maintained a private law practice from 1976-1984, and again from 1995-1999.  She currently works in the Dallas City Attorney’s office, focusing on Appellate Law.  She is most likely best known for her 1992 campaign against the incumbent Republican Criminal District Court Judge, Jack Hampton. The campaign win made national news.

This archive collection, generously donated by Attorney Rosenberg, includes childhood and college memorabilia, professional and personal speeches and information from her time on the bench, campaign materials (including ground-breaking video from her local TV advertising spots), and a copy of the Gender Bias Task Force of Texas report which she co-authored. Contact the Dallas Jewish Historical Society to view the collection, or check out the extensive collection of oral histories from Dallas Jewish personalities at www.dallasjewishstories.org.

The Dallas Jewish Historical Society works to collect, preserve, and protect the papers, photographs, artifacts, and recorded personal stories that illustrate the history of the Jewish community in Dallas.